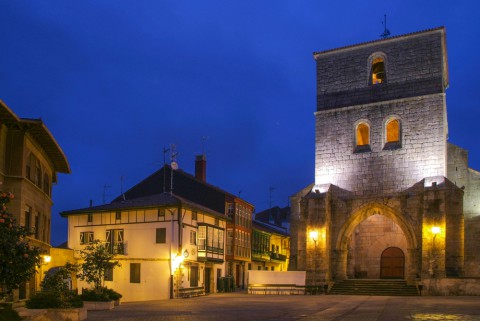 Built between the 15th and early 16th centuries, the church of Santa Maria Magdalena is an austere Gothic hall church, with a rectangular floor plan and 3 nondomed naves separates by pillars.

The robust bell tower was a watchtower over the river estuary. This tower is the element that stands out the most on the exterior, especially for the solid appearance of its tower, prism-like tower.

Particularly noteworthy is the coffered timber ceiling, designed by Severino de Achucarro in 1887 and executed by local contractor Martín González de Durana. Several religiaus sculptures, such as the Recumbent Christ, the Penitent Mary Magdalene and St. Peter, remain of its earlier décor.

The shell-shaped baptism font of uncertain provenance and the model boat hanging from the coffered ceiling are also of note. This is a typical offering in coastal towns that was made to seek protection. Inside the church, one of the most interesting features is the set of five alabaster panels making up the Polyptych of the Passion, dated between 1440 and 1480.