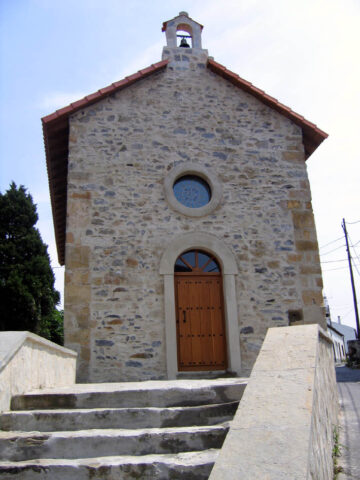 Aesthetically, this building lacks decorative features of any great interest, except for a low belfry and the blocked-up opening in the façade. In architectural terms, the building we see today is rectangular in plan, with a single nave and choir, lit by three openings and a lintelled door—without the metal cornicework which once protected it—with a staircase leading up to it. It is built in plastered and whitewashed stone masonry, and the gable end of the façade is topped with a belfry containing a bell.

The original building was restored in 1906 under the direction of the Master of Works José Bilbao Lopategui. The work was executed by local contractor Martín González de Durana.

The chapel was built on the site of a humilladero, or shrine. These medieval religious constructions were erected outside city walls, often at the entrance to towns and at crossroads to provide travelers a place to pray during their journeys. They originally consisted of simple pedestals with crosses or images, but gradually grew into roofed buildings which later became chapels of a type typically found in the municipalities of Fruiz, Arrieta and Fika. In some cases, vigils were held in these chapels, in accordance with popular traditions requiring the dead to be put on public display before being finally laid to rest.